"Mastery in wood is what we constantly strive to achieve." 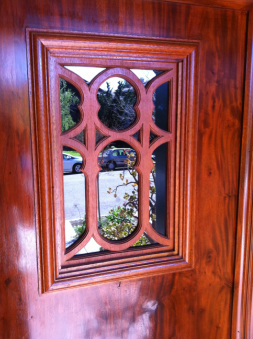 Aziz fell in love with wood as a boy, carving and polishing small shapes by hand. As a young man he rediscovered this love while working on a hardwood chest with an early mentor. This is what started Aziz on the lifelong journey of studying the craft of woodworking- a humble beginning in a basement shop in San Francisco.
The journey led Aziz to New Mexico, where he apprenticed under Benjamin Van Hatten (founder of Andaluz Woodwork, Abiquiu, NM) studying handcarving along with furniture construction. After a good deal of work experience in various shops and a challenging application process, Aziz was accepted into the College of the Redwoods Fine Woodworking Program in 1999 and again in 2001. Hundreds apply to this exclusive program each year, yet only 17 new and 6 returning students are admitted. While there, he honed his skills and refined his aesthetic under the tutelage of internationally renowned master craftsman James Krenov (Krenov passed away in 2009,  and is missed for more than just his master-level woodworking). After completing 3600 hours (and burning innumerable gallons of midnight oil!) Aziz was well on the road to mastery of the craft.
As this journey of knowledge and skill continues,  it has taken Aziz to ever-more-distant lands. In 2002 Aziz traveled to Istanbul Turkey,  studying with three different master luthiers, and learned much about the style of work in the East. Aziz also undertook an independent study of Ottoman design and complex joinery, involving close observation of traditional techniques and hundreds of rubbings of the patterns found in the doorways and arches of mosques.
His body of  work includes a variety of elegantly crafted pieces, ranging from intricate carved boxes to Chinese-style vanities with hand-tooled details, all with hand-rubbed natural finishes allowing the natural beauty of the wood to shine through. All of  the pieces are one-of-a-kind, meticulously designed objects of function and beauty. As a skilled craftsman Aziz employs many traditional techniques such as hand cut joinery, hand made veneers, and decorative carving. " The importance of hand work is that through the exchange of energy a part of my life is given to the wood, and that is what makes an object really shine. " -Aziz

Notabal work includes a piece made for the Kenmore Plantation Museum in Fredericksburg, VA.

Aziz has  shown several pieces at the Highlight Gallery, and in the CR Fine Woodworking winter shows in Mendocino, CA.
Aziz has had works commissioned by private patrons as well as commercial parties. Aziz is highly sought after for my craftsmanship, sometimes traveling as far as the East Coast.